Well we had fun this weekend!! ( that was sarcasm !)

I got an offer of a classic car shell to make some Fibreglass molds so I can make some new panels to hopefully sell on. The biggest problem was the 200+ miles between me and said shell!
The kids were away already so I grabbed the Mrs and off we went, that was after many phonecalls to try and find a BnB in Blackpool on a bank holiday weekend at short notice that would allow dogs!

We didn't leave till gone 3pm and after a steady trip up the M5 with the Landy temperature gauge hovering just under the red we got there about 8. As it was a bank holiday weekend we found parking difficult, ended up taking the trailer off and pushing that into a space with the landy parked across the back of it. A short wander around the sea front and a pizza for tea we headed back to the BnB for bed.
The following morning we could move the Landy and trailer into a better place while we walked the dog on the beach. 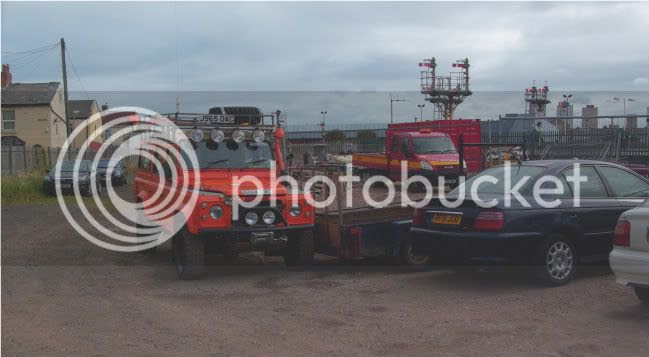 We left the carpark and immediately found a lack of clutch which turned out to be a lack of fluid due to a leak some where, found a garage a few miles down the road where I managed to find some fluid and all was well again.
I also noticed some squeeking noises coming from underneath the truck which on inspection was a blown UJ on the front propshaft, oh joy!!
We met the seller at the arranged place and then followed him to his yard. I checked the prop and the fluid while there and there was no change for the worse so I decided to carry on.
The shell was loaded onto the trailer, straps tightened and trailer lights checked, after a cup of coffee we were away. several hill starts to get of his estate did not do the prop UJ any favours but once we found the motorway it quietened down and we could sit at around 60/65 with out to much fuss. Temperature gauge was still hovering just below the red but showed no sign of climbing.
The UJ did let out a scream just after we left the M6 but after slowing down on the hard shoulder it went quiet again so I pulled back on to the carriageway and carried on.
Then as we just passed the entrance to a service station I happened to glance in the mirror to see a cloud of smoke coming from the off side of the trailor. I quickly pulled onto the hard shoulder to investigate. Nothing was obvious so I jumped back in the truck and slowly drove to the exit slip of the services so I could cross over to the inside hard shoulder were I could inspect the trailer in more safety. After a poke about it turned out to be a seized hub which stopped the wheel turning. I chose the easiest option which was to remove the road wheel from the offending hub and carry on with a 3 wheeled trailer. 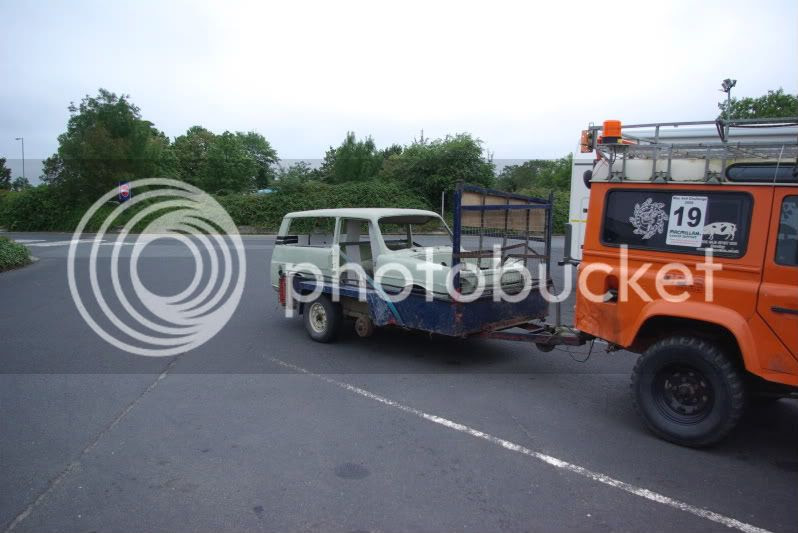 The propshaft continued to make odd noises and vibrate occasionally but it held together and we arrived home around 8pm.
All in all an experience of a weekend :)
Posted by grunty at 12:34 No comments:

A place I work at have some large jigs for painting on, 3m long near 2m high + wide on 4 steel castors. They get filled with painted items and pushed in and out of the ovens. Doing this means they pick up paint on the wheels which breaks off randomly meaning square wheels that rattle the jigs and the items that were just painted can fall off

First job was to mount the wheels in the lathe. I made a mandrel out of some steel bar, turned the end down so the wheel slide on but leaving it over hanging, a 12mm thread was put in the end, aftera 10mm stripped to easy as it wouldn't hold tight enough. The wheel was then put on and bolted up using suitable spacers. 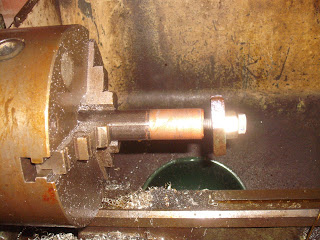 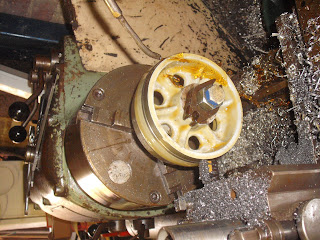 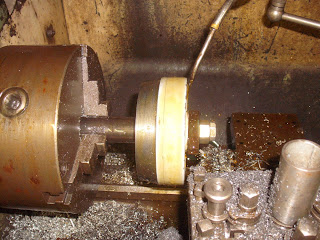 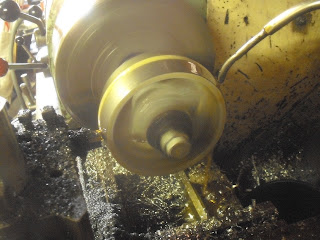 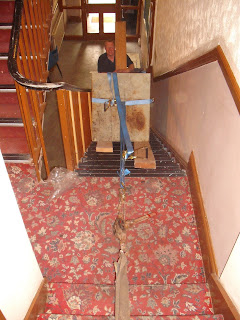 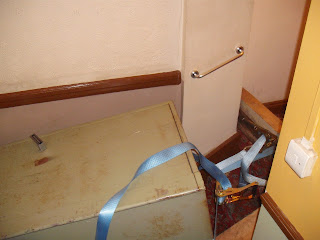 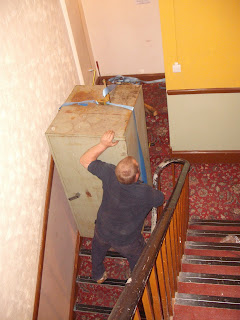 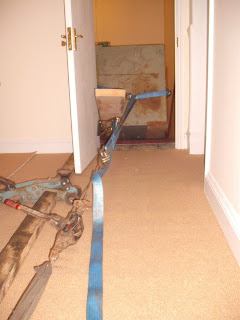 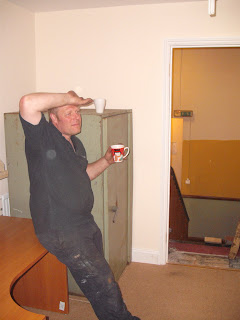 I was asked to make a stage set for a theater company in Cirencester for their production of The Secret garden. I had to build a platform that stood approx 6 feet high on which several people could dance and would be accessed by a flight of steps at each end.
I used 40mm box and 19mm ply and this is what I came up with.. 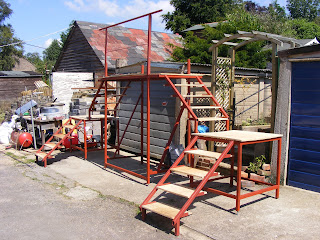 The stage at the theater was built on a slope towards the front which meant I had to install some adjustable feet for the whole assembly.

For transport and storage the assembly was built in sections, 4 step flights, 2 square frames and the main frame flat packed.

When on stage we installed uprights on the steps and intermediate frames and this allowed us to fit a rope banister going up the steps and meeting the top rail both back and front.

This picture shows it on stage ready for action. I have to admit I was quite nervous as the top was filled with dancing actors and acrtresses :) 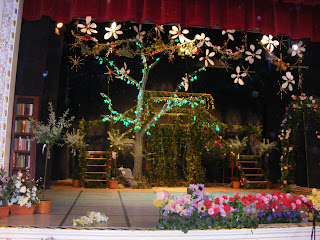